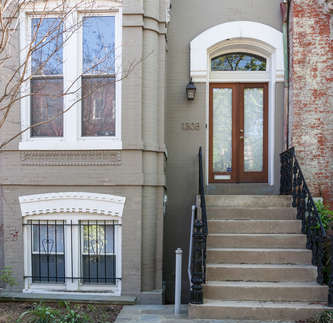 Logan Circle, originally called Iowa Circle until 1930, was part of L’Enfant’s plan for DC. During the Civil War, what was to become Logan Circle was home to a former barracks that was converted into a refugee camp for newly freed slaves called Camp Barker. In the 1870s, Washington Mayor Shepherd had streets, trees and other amenities added to encourage development of the area. Streetcar tracks were built into what was then a swamp, north of downtown Washington, resulting in development that brought blocks of Victorian row houses. Marketed to the upper middle class, many of the larger homes came with carriage houses and attached servant’s quarters.

Shaw, named after Civil War Colonel Robert Shaw also began as a freed slave encampment. Howard University opened in the area in 1866, allowing for further development. The neighborhood was a center for jazz during the 1920s and 30s and was home to musician Duke Ellington.

The entirety of Logan Circle-Shaw has experienced a great amount of gentrification and redevelopment in the past two decades, resulting in a resurgence of population. With its beautiful and historic housing, great location, upscale commercial activity and civic-minded residents, today’s Logan Circle-Shaw is on an upward trend.