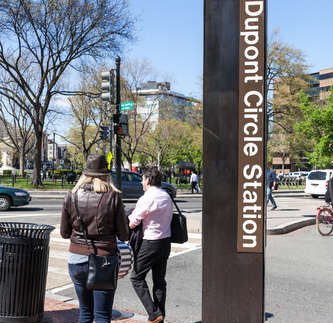 Dupont Circle is a park, traffic circle, historic district and neighborhood in Northwest Washington, D.C. Served by the Washington Metro Red Line at the Dupont Circle Metro station, the neighborhood is located in the “Old City” of D.C. Planned by architect Pierre Charles L’Enfant, the area remained largely undeveloped until after the Civil War.

During the 1870s and 80s, mansions were built along Massachusetts Avenue and townhouses were built throughout the neighborhood. Connecticut Avenue became more commercial. As development continued, traffic congestion made it necessary to modify the traffic circle, add tunnels and an underground streetcar station that functioned until 1962.

Following a concerted effort to recover from decades of damage done starting with the 1968 riots over the death of Martin Luther King, Jr., gentrification has caused the area to become a more mainstream location with restaurants, bars, coffeehouses and upscale retail locations. Homes include rowhouses primarily built before 1900, rare palatial mansions, freestanding houses built in the styles popular in the late 1800s and Italianates.